In the VLR, the pumped liquid passes through a nozzle that provides a high velocity jet of fluid to create suction of the gas. In a mixing tube, the high velocity jet attaches itself to the mixing tube wall, resulting in a rapid dissipation of kinetic energy, which creates an intensive mixing with the production of a fine dispersion of gas bubbles. The two-phase mixture that “jets” into the reaction autoclave here also causes intensive mixing. The ejector of VLR in many cases can be considered as a device for the complete saturation of the liquid with gas. This occurs because of a high kLa value, and the concentration variation for the reactions is insignificant due to a short contact time. The holding vessel can be considered as a well-stirred reactor with a very high kLa value. Taking into account that the Hatta number of ethoxylation reactions is <1, a Venturi loop reactor can be simulated by considering it as a well-stirred isotherm reactor. 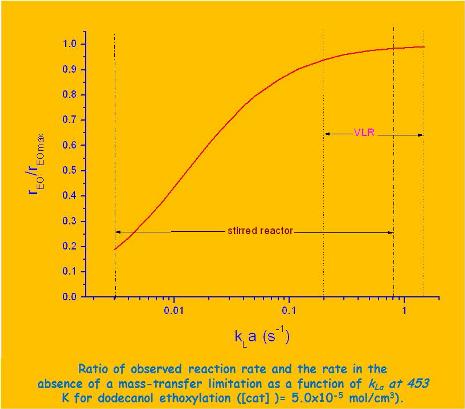 In the case of dodecanol ethoxylaion, for example, To prevent a significant mass-transfer limitation, values of kLa > 0.1-0.2 s-1 are needed. These values can be reached in a stirred reactor with a high stir speed (>1000 rpm), which is not easy to achieve in industrial reactors. In the case of VLR, the required kLa values can, on the contrary, be achieved with a power input per unit volume 10 times less than that for stirred reactors