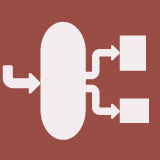 The epoxide ring opening reaction (ROR) can be considered as the most important side reaction occurring in the epoxidation of soybean oil reaction network. This reaction consistently reduces the selectivity to epoxidized soybean oil (ESBO). The reaction is also important for producing polyols and lubricants. In this work, the reaction was studied in different operative conditions to evaluate the effect on ROR rate respectively: (i) The Bronsted acidity of the mineral acid (H2SO4 or H3PO4), used as catalyst for promoting the oxidation with hydrogen peroxide of formic to performic acid, that is, the reactant in the epoxide formation; (ii) the concentration of the nucleophilic agents, normally present during the ESBO synthesis like HCOOH, HCOOOH, H2O, H2O2; (iii) the stirring rate that changes the oil–water interfacE
area and affects the mass transfer rate; (iv) the adopted temperature. Many different kinetic runs were made in different operative conditions, starting from an already epoxidized soybean oil. On the basis of these runs two different reaction mechanisms were hypothesized, one promoted by the Bronsted acidity mainly occurring at the oil–water interface and one promoted by the nucleophilic agents, in particular by formic acid. As it will be seen, the kinetic laws corresponding to the two mentioned mechanisms are quite different and this explain the divergent data reported in the literature on this subject. All the kinetic runs were correctly interpreted with a new developed biphasic kinetic model.