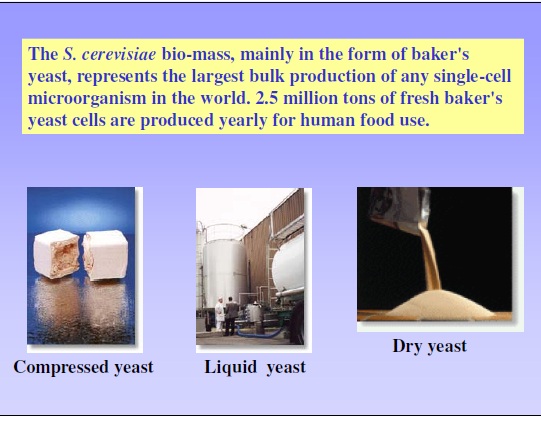 The production of baker’s yeast involves the multi-stage propagation of the selected yeast strain on molasses as the carbon source.

In the production of baker’s yeast in fed-batch fermentation, the effects of variables such as pH and temperature are known, and their set points can be chosen. On the other hand, the most critical variable, the flow rate for molasses addition is not defined and the demand for molasses will change during the fermentation processes. Optimal variation of the molasses flow can bee foreseen from an adequate simulation model.Bearing in mind that yeast metabolism is strongly affected by culture conditions, this technological approach was designed to maximize yeast yields.

Accurate kinetic modeling of the growth behaviour of S. cerevisiae requires detailed knowledge of intracellular control mechanisms. Monod’s classical model is clearly not sufficient to predict, for example, the diauxic growth pattern. As a general rule, all the unstructured models are too simplistic to predict these dynamics accurately, as they do not consider the intracellular regulatory mechanisms. As you can imagine, it would be a laborious task to model all individual enzymatic steps using detailed metabolic model A simplification of this problem has been furnished by Rhamkrishna et al, who working from the cybernetic viewpoint have developed a general modeling framework (The Cybernetic Model)

This model was used to simulate the experimental data obtained by von Meyenburg in batch growth on glucose.

The same model has been tested on a well-mixed fed-batch run performed by Wang et al.

The cybernetic model has been also used to simulate a biomass production run performed by Oura in a continuous reactor fed with a synthetic medium containing glucose.

Since the described model shows high potentiality in the simulation of regulatory processes of yeast, this approach was used to simulate bio-mass growth in an industrial bio-reactor.

In conclusion, starting form batch and fed-batch laboratory data, it is possible to scale-up and to optimize the management of the industrial bioreactor for a given type of yeast strain and substrate.