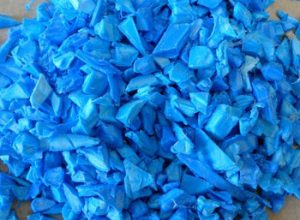 Basic Heterogeneous Catalysts for the Synthesis of Poly(Ethylene Terephthalate) [1]

Polyethylene terephthalate (PET) is largely used for the production of films, plastic objects and fibres. The production of PET is normally carried out in two stages: (I) prepolymer synthesis which is mainly bis(2-hydroxyethyl)terephthalate (BHET); and (II) a polycondensation stage. The prepolymer is synthesized either through the esterification of terephthalic acid (TPA) and ethylene glycol (EG) or through the transesterification of dimethyl terephthalate (DMT) and EG. The transesterification reaction is promoted by homogeneous catalysts such as zinc, manganese, lead acetates, and many others, used alone or in mixtures ( E. Santacesaria et. al. App. Polym. Sci. 54 (1994) 1371.;M. Di Serio et al. J. App. Polym. Sci. 62 (1996) 409). All the catalysts used for transesterification could catalyse the polycondensation because the two reactions are quite similar, but these catalysts do not provide satisfactory products because they are also active in ester decomposition ( R. Lasarova, K. Dimov, Angew. Makromol. Chem. 55 (1976) 1; U.K. Thiele, Int. J. of Polymeric Materials, 50 (2001) 387). Therefore, in practice the transesterification catalyst is sequestered using an opportune additive, and a different polycondensation catalyst, mainly an antimony compound, is introduced for the second stage.

NICL investigated the use of these basic solids as a catalyst in both DMT transesterification and successive polycondensation. To this end, Al2O3, calcined Al-Mg hydrotalcite (CHT1, CHT2) with different Al/(Al+Mg) theoretical atomic ratio were tested in transesterification reactions and characterized. Moreover, a calcined Al-Mg hydrotalcite (CHT2) was also used as single catalysts to produce PET from DMT.

The activity of transesterification reactions is related to the concentration of medium and strong basic sites, which increases along with the decrease of the Al/(Al+Mg) ratio. 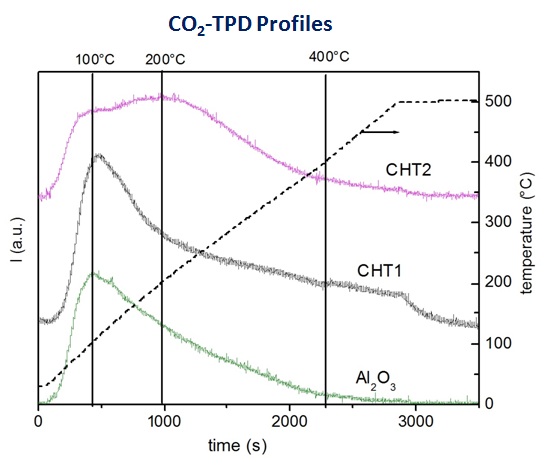 It was confirmed, moreover, that the calcined Al-Mg hydrotalcite can be used as a single catalyst in PET production from DMT.