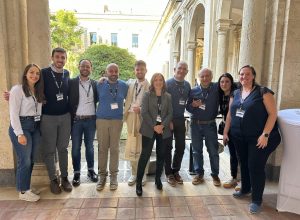 NICL group took part at the XXII National Conference of the Industrial Chemistry Division of the Italian Chemical Society (Catania 07-08 November 2022). The Neapolitan big delegation took active part to the scientific programme with oral and poster presentations on acute and actual topics in chemical kinetics, catalysis, reaction engineering, and water treatment from emerging contaminants, some of them on PRIN project LEVANTE. The discussions with the Italian colleagues were interesting and new ideas for networking have been settled down. Finally, Luca Mastroianni (PhD student of both NICL and TKR) was awarded for the best MSc thesis on the topic “Oxidation of Alcohols Promoted by Gold in a Microreactor: Kinetic and Modeling Study”.