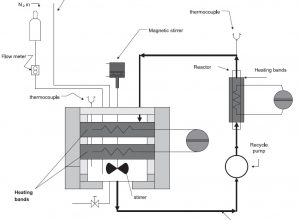 In this work biolubricant synthesis, obtained by esterification reaction between fatty acids and several polyols using H2WO4/SiO2 as acid catalysts has been reported. Biolubricants in the last few years have generated a great interest in the scientific community and represent an alternative to the petrochemical lubricants. Their properties are similar to those of petrochemical lubricants but at the same time they are more degradable, less toxic and so less polluting with respect to mineral lubricants. The purpose of this work is to verify the catalytic activity and the catalyst stability in the esterification reaction by performing experiments in both batch and loop packed bed reactors. The results obtained for the synthesis of lubricants are very encouraging: high yields and a good stability of the catalyst. The collected data have been interpreted with a lumped kinetic model, obtaining satisfactory results for both the investigated systems.