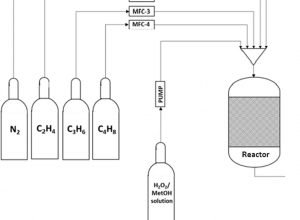 Direct epoxidation of light olefin mixtures with hydrogen peroxide and titanium silicalite (TS-1) catalyst is interesting from a pure scientific viewpoint and it might have a considerable economic and environmental advantages. Direct epoxidation of olefin mixtures implies a significant process intensification as the separation steps of alkenes prior to the epoxidation process is avoided. Binary and ternary mixtures of ethene, propene oxide and 1-butene were selectively epoxidized with hydrogen peroxide in the presence of TS-1 as the heterogeneous catalyst. Methanol was used as the solvent. Transient and stationary kinetic experiments were conducted in a laboratory-scale trickle bed reactor, which was operated under atmospheric pressure and isothermal conditions at 15-55°C. The experiments were designed to investigate the kinetics of the epoxidation of light olefins at different temperatures, alkene-to-hydrogen peroxide molar ratios as well as gas and liquid residence times in the trickle bed reactor. The recorded transient responses of the reaction products confirmed that the components in the alkene mixtures are epoxidized simultaneously. The epoxide selectivity was 90% or higher in most experiments; ring-opening products formed from the epoxides and methanol were observed as by-products. The concentration maxima of epoxides during the transient experiments were explained by accumulation of the epoxide products inside the catalyst, which resulted in partial blocking of active sites. After-treatment of the catalyst with methanol and nitrogen completely restored the initial activity. Kinetic modeling was applied, based on presumed elementary steps on the TS-1 surface to describe the behavior of the system at steady state conditions. The trickle bed reactor was described with a dynamic multiphase model, taking into account the kinetic and mass transfer effects. The numerical values of the activation energies, kinetic constants and mass transfer parameters were estimated by nonlinear regression analysis. The model gave a satisfactory description of the experimental data.