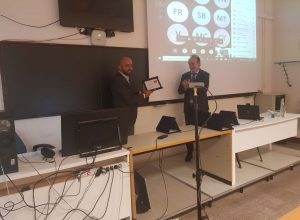 The Interdivisional Group of Catalysis (GIC) of SCI, to honor the memory of Robert Karl Grasselli, by accepting the request of his wife Dr. Eva-Maria Hauck-Grasselli, promoted the institution of two prizes to be awarded, on a regular basis possibly annual, to an Italian scientist with a maximum age of 37 (completed by 31 December of the year in which the award is awarded) working in both academic and industrial research centers. The prize is give considering the  contributions of particular scientific, innovative and applicative importance, in the sector of heterogeneous catalysis in the gas phase