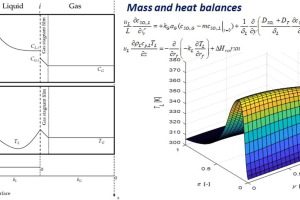 Falling film reactors represent the actual technology to run sulfonation reaction at pilot and industrial scale. The reaction is characterized by high thermal tenor, thus realizing a liquid reactive film flowing directly downwards on the internal reactor wall, it benefits of high heat exchange to the external jacket. The scale-up of such reactors is straightforward as it consists mainly on increasing the pipe numbers, with heat exchanger shell/pipe architecture. The main problem of this reactor solution is its modelling. The fluid-dynamics is complex to be fully described and the few models proposed in the literature lacks in rigorousness. The aim of the present work is the realization of a detailed reactor model able to describe sulfonation reaction in a falling film reactor. The simulations were compared with data collected on a pilot-plant.