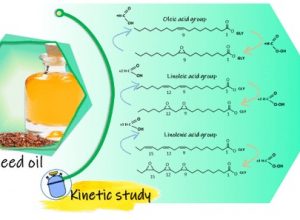 Epoxidation of Linseed Oil by Performic Acid Produced In Situ

Linseed oil is characterized by an elevated concentration of highly unsaturated fatty acids such as linolenic and linoleic acids. This work has the objective to evaluate the effect of the high unsaturation of linseed oil on the reactivity and selectivity of the epoxidation reaction. For this purpose, different kinetic experiments of linseed oil epoxidation with performic acid, produced in situ, and phosphoric acid as catalyst, have been performed and interpreted with a biphasic kinetic model previously tested on soybean oil epoxidation. This model considers the contribution of the main reactions involved in each phase, including the side reactions such as performic acid decomposition and ring opening reactions. The experiments made have been simulated, with the mentioned kinetic model, after the evaluation by mathematical regression of the kinetic and thermodynamic parameters of the model. Then, the obtained results have been compared with those described in the literature for soybean seed oil, considering, in particular, the effect of the different unsaturated fatty acids composition on activity and selectivity.