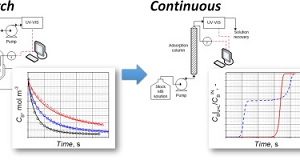 Design of an adsorption column for methylene blue abatement over silica: From batch to continuous modeling

Scale-up processes are a central feature of chemical engineering science and technology. In this field, researchers’ efforts focus on the development of mathematical models that could be able to interpret physical and chemical phenomena on several dimension scales. Adsorption systems are typical operation units that fall in the mentioned category. In fact, moving from the particle to the fixed bed scale, a further dimension represented by the column axial coordinate is added to the system (and, for larger columns, also the column radial coordinate). In a previous work, an Adsorption Dynamic Intraparticle Model (ADIM) has been proposed and validated by the authors for adsorption batch systems. In the present paper, an attempt to implement the model equations for continuous systems has been made. For validation purposes, an adequate experimental investigation has been obtained by carrying out adsorption experiments both on batch and in continuous devices by using a model system that is represented by aqueous methylene blue over silica. Starting from batch experiments, where some fundamental mass transfer parameters, such as the surface diffusivity (DS), the tortuosity factor (τ) and the mass transfer coefficient (km), have been determined, the ADIM model has been extended to the prediction of the breakthrough curves obtained in continuous system, obtaining good agreements with the collected experimental data. In this way, it has been demonstrated that the ADIM model is a powerful, flexible tool for adsorption modeling over increasing dimension scales.