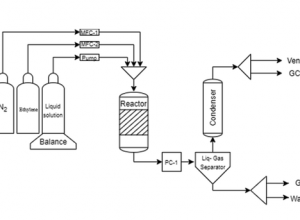 Ethylene epoxidation with hydrogen peroxide was studied in a laboratory-scale trickle bed reactor under a broad range of experimental conditions (15–80 °C, 2.5–8.5 bar) utilizing a commercial titanium-silicate catalyst (TS-1). The catalyst was very stable and selective over 150 h time-on-stream. The main reaction product was ethylene oxide, while 2-methoxyethanol and ethylene glycol were observed as kinetic byproducts. In most of the experiments, ethylene glycol was not detected at all. An increase in temperature and pressure affected negatively the ethylene oxide selectivity, while an increase in the hydrogen peroxide concentration improved both the ethylene oxide selectivity and ethylene conversion. Ethylene epoxidation was comparable with propylene epoxidation, displaying, however, important differences in activity and selectivity, which were attributed to the partial pressures studied in the present work. It was demonstrated that TS-1 is a very selective and active catalyst for the selective epoxidation of ethylene with hydrogen peroxide.