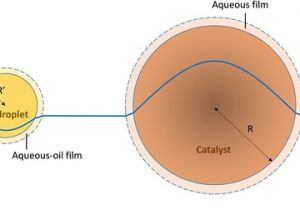 A rigorous mathematical model was developed for a complex liquid–liquid–solid system in a batch reactor. The approach is general but well applicable for the indirect epoxidation of vegetable oils according to the concept of Nikolaj Prileschajew, implying in situ prepared percarboxylic acids as epoxidation agents. The model considers intra- and interfacial mass transfer effects coupled to reaction kinetics. The liquid phases were described with chemical approach (aqueous phase) and a reaction–diffusion approach (oil phase). The oil droplets were treated as rigid spheres, in which the overall reaction rate is influenced by chemical reactions and molecular diffusion. The model was tested with a generic example, where two reactions proceeded simultaneously in the aqueous and oil phases. The example (i.e., fatty acid epoxidation) illustrated the power of real multiphase model in epoxidation processes. The proposed modeling concept can be used for optimization purposes for applications, which comprise a complex water–oil–solid catalyst system.