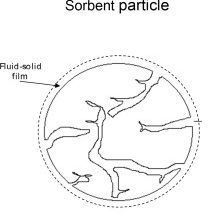 The fluid-solid adsorption batch kinetics is surely one of the most popular topic in the chemical engineering science. The water purification from pollutant components, such as metals and organic compounds, can be considered one of the main application of this field. Even if the topic is of a great scientific and industrial interest, the modeling of the mentioned systems is by now far to be reliable. As a matter of fact, most of the models reported in the literature are based on semi empirical approaches that describe the adsorption experimental data on the basis of equilibria and the kinetic terms. In this paper, a new modeling approach is proposed for adsorption kinetics investigation performed in batch reactors with a fluid-solid system. In particular, the mass balances have been developed by taking into account for both the external and internal mass transfer diffusion limitations, solving the dynamic partial differential equations (PDEs) system along the radius of the sorbent particles, considering both the fluid and solid phases that constitute the sorbent particle. From a numerical point of view, the solution of this type of problem is very challenging because it involves the simultaneous solution of many PDEs, ODEs and AEs. Here, physical parameters have to be evaluated either from existing correlations or by direct measurements. This fact makes the model predictable. In order to test the model, some Cu(II) and Pb(II) adsorption tests, taken from literature, using different kind of silica have been interpreted. The presented model can be considered of great interest, as it is the starting point for designing continuous adsorption columns for water purification.